MENUMENU
Invest in Us
Who We Are
Why Sponsor
Donate

“The Festival focuses on meeting a critical need in America: motivating and invigorating the next generation of young innovators about science and engineering and, at the same time, expanding the public’s appreciation and understanding of science and technology.” – Larry Bock 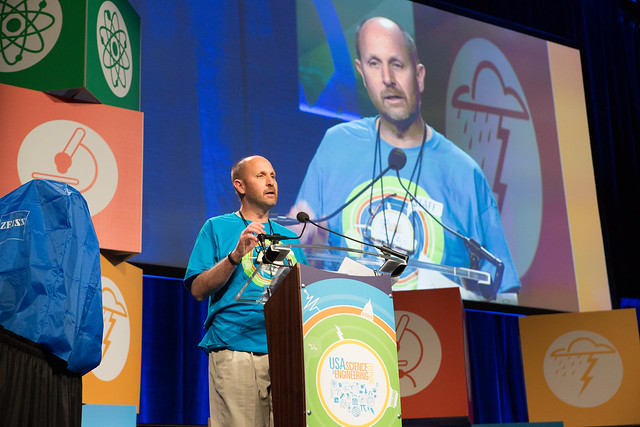 Celebrating a decade of STEM Outreach.
From climate change to pandemics to a competitive global economy, the children of the United States are facing an uphill battle, and it’s our job to help them create a better world for the future. In 2010, serial entrepreneur Larry Bock had a vision. Bock knew that the US was struggling to fill the STEM talent gap and that students were scoring poorly in science and math. He was also keenly aware that students and teachers in underserved areas lack the resources to help them succeed.  The USA Science & Engineering Festival was created to reinvigorate the interest of STEM in our nation’s youth.

With exciting hands-on activities from hundreds of companies, universities and government agencies; diverse STEM role models; and science stage show presentations; students can see and experience firsthand the vast and exciting world of the STEM fields. With the help of our partnerships, we provide free and engaging content for children which keeps our programs accessible to all students. Learn more about Larry Bock and the history of the USA Science & Engineering Festival here.

Invest in STEM. Invest in the Future.

The USA Science & Engineering Festival’s mission is to stimulate and sustain the interest of our nation’s youth in Science, Technology, Engineering, and Mathematics (STEM) by producing and presenting the most compelling, exciting, and educational events in the US.

We host a large diverse population of K-12 students from all demographics. 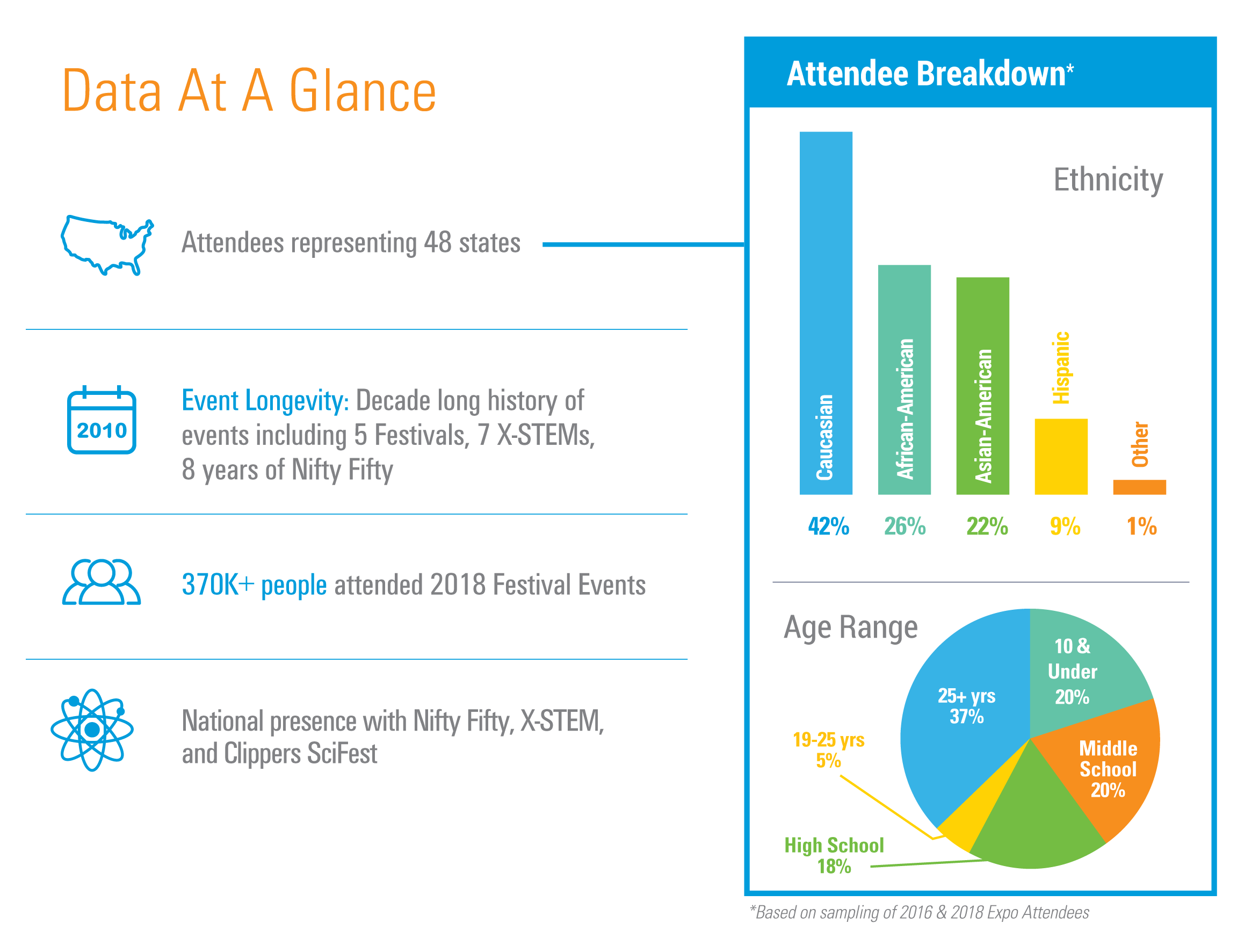 “First time attending this event. Definitely not the last. So much to see! Our future depends on events like these. I wanted my daughter to see what the world of science and Engineering has to offer and the USA Science & Engineering Festival delivered just that!!” Parent, Expo Attendee 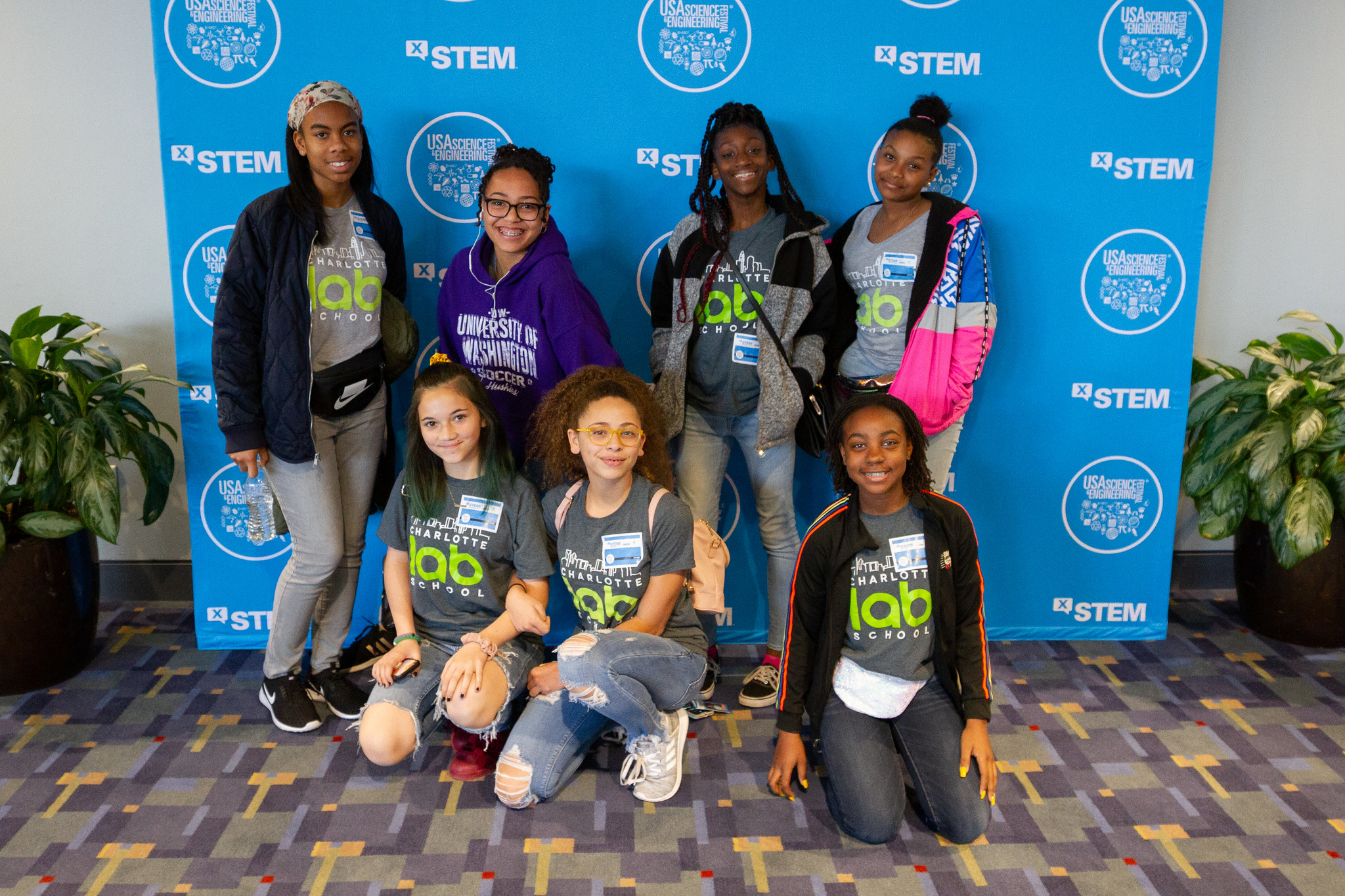 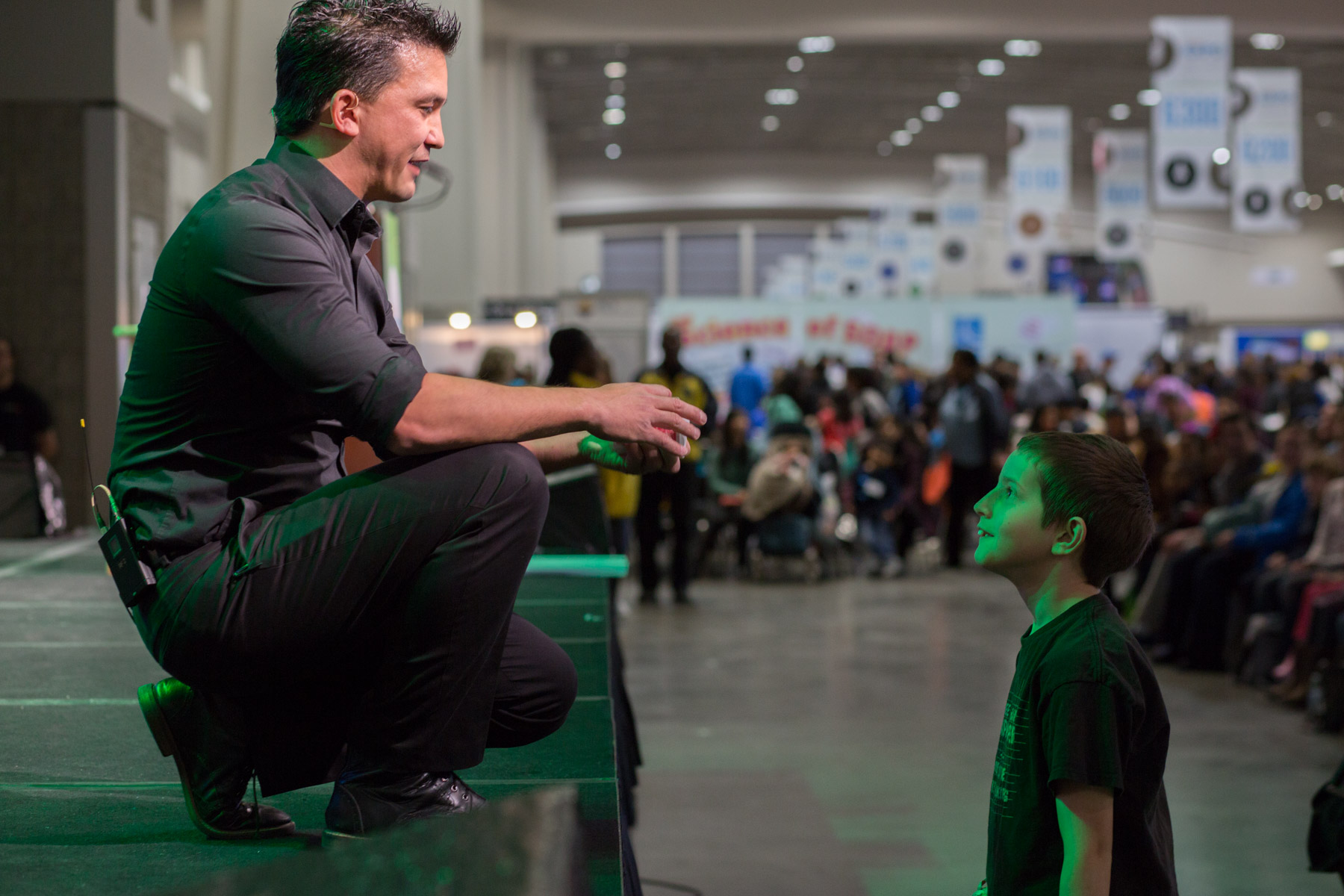 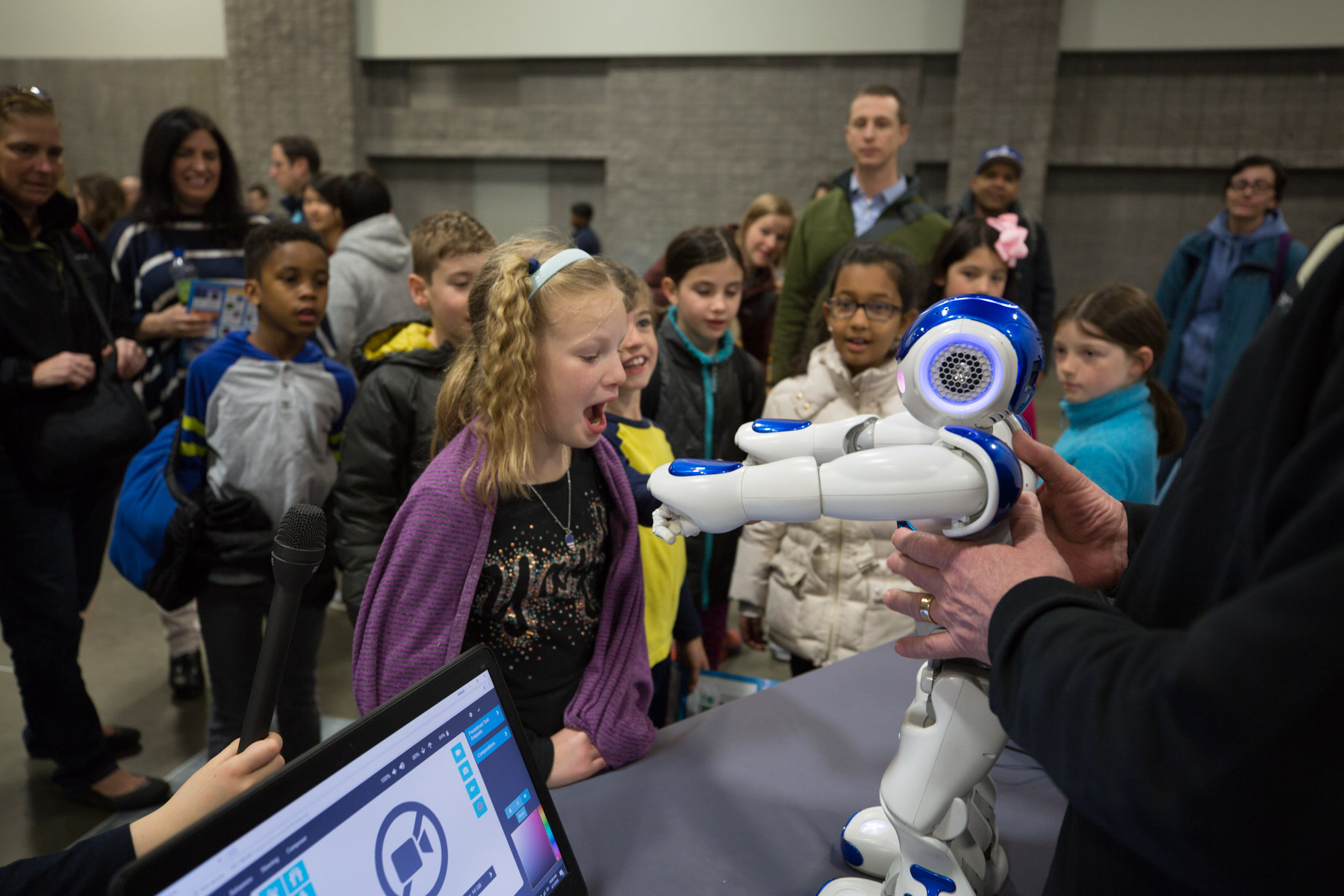 How to Help Fund Our Programs

The USA Science & Engineering Festival is managed by Science Spark, a 501(c)3 non-profit science outreach organization, and is funded through corporate sponsorships, government grants, and private donations. Here are ways that you can help support our mission and keep our programs accessible to all future innovators.

Sponsorship:
Your organization can help create awareness for workforce development, illuminate your STEM initiatives and products, and reach future employees by sponsoring our events.  Click here to learn more about becoming a sponsor or contact us today!

Donations:
Every dollar counts! Did your child benefit from the USA Science & Engineering Festival programs and events? Are you a STEM outreach enthusiast eager for a breakthrough in climate change, cancer research or the next big discovery?  Help us inspire the next generation to change the world!  Your contribution will allow us to continue to keep these events accessible to all!  Click here to donate.

Philanthropic foundations and large donor-advised funders can contact us directly to learn more.

“My son is a smart, curious kid, but he also has dyspraxia (fine motor trouble, he’s slow to get work done, etc). Your PHENOMENAL festival single-handedly, in a single day, re-inspired him and gave him SUCH a shot of confidence, it is just amazing. He is literally standing taller, days later, due to the successes he had doing experiments, and from encouragement, he received from “real scientists”. He said to me with wonder in his eyes, “can you believe it mom? REAL SCIENTISTS said to me that I had good ideas!” I can’t begin to tell you what that means to him, and to me, for a kid  who’s always hearing about how slow he is, to give him a kind word, to entertain his questions, and to give him feedback on his ideas, was nothing less than a gift.” Parent, Expo Attendee

Where Your Support Goes

A financial contribution to the USA Science & Engineering Festival supports the following programs and initiatives. Our programs also include unique sponsorship opportunities tailored to fit your organization’s goals in STEM outreach. Contact us to see how we can customize a sponsorship package for you!

Celebrating STEM on the West Coast! 2-Day hands-on event for K-12 students and their families.

“X-STEM is an outstanding event! It does an excellent job of exposing young people (as well as adults!) to the kinds of STEM careers that are possible. The speakers are top-notch and always willing to engage with students after their remarks. As the parent of two African-American children, I especially like that the line-up of speakers is so diverse. For minority students, seeing scientists and engineers who look like them makes it that much easier for them to believe that they too can succeed in STEM.” Parent, X-STEM Attendee

The Importance of STEM

“Strengthening the STEM educational foundation of our nation is vital to our future economy and the health, safety, and well-being of America’s families. Once you’ve outsourced innovation, the game is over.” – Larry Bock

According to the Pew Research Center, employment in science, technology, engineering and math (STEM) occupations has grown 79% since 1990, from 9.7 million to 17.3 million, outpacing overall U.S. job growth.

In the Brookings Institute “Hidden STEM Economy” researchers found that as of 2011, 26 million U.S. jobs—20 percent of all jobs—require a high level of knowledge in any one STEM field.

In addition, the Brookings Institute report concluded that half of all STEM jobs are available to workers without a four-year college degree, and these jobs pay $53,000 on average—a wage 10 percent higher than jobs with similar educational requirements.

The Smithsonian Science Center’s “STEM Imperative” report it found that minorities are deeply underrepresented in STEM fields—just 2.2% of Latinos, 2.7% of African Americans, and 3.3% of Native Americans and Alaska Natives have earned a university degree in STEM fields.

In “Closing the STEM Gap” by Microsoft researchers concluded that 75 percent of girls who participate in STEM clubs and activities understand the types of jobs they could do with STEM knowledge, compared to 53 percent who do not participate in those activities. By providing more exposure to positive role models and mentors they can both relate to and aspire to be enhances girls’ engagement in STEM.

US Government Support and Recognition 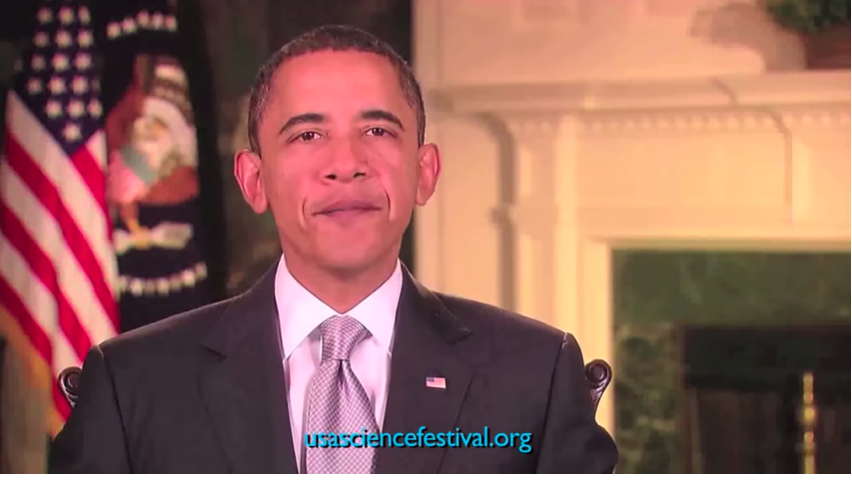 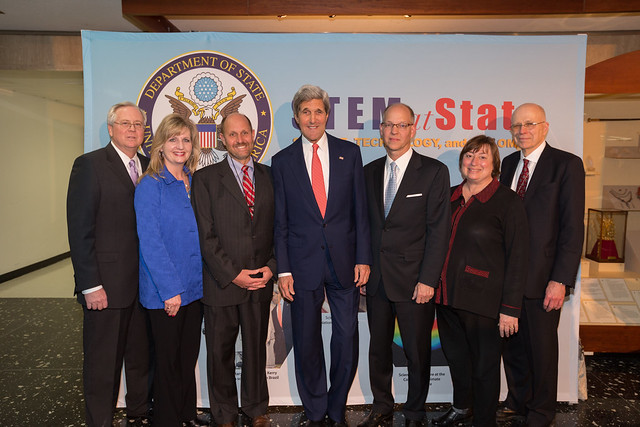 2014 Sponsor VIP reception hosted at the State Department with a welcome address from former Secretary of State John Kerry. 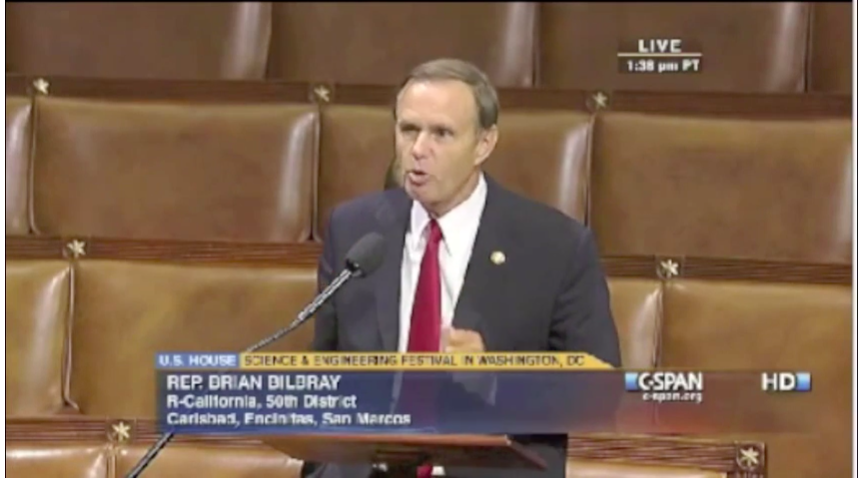 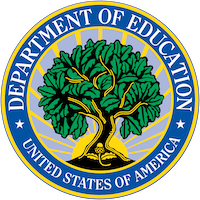 Acknowledged in the US Department of Education STEM Report, “Large events like the USA Science and Engineering Festival (USASEF) serve as a catalyst, bringing scientists and engineers under one roof to meet over 350,000 students and members of the public in one weekend. Throughout the school year, USASEF brings more than 150 diverse scientists and technology professionals into K–12 classrooms throughout the OFFICE OF Innovation and Improvement 42 Washington, D.C., region, with a focus on underserved schools in communities of color. “ 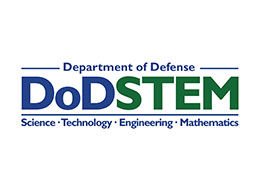 The USA Science & Engineering Festival was selected to join the  U.S. Department of Defense’s (DoD) Defense STEM Education Consortium (DSEC) which will strengthen kindergarten through college STEM education and outreach programs across the United States.

Named for one of the key founders of the U.S. Air Force, the Vandenberg Award, established in 1948, is one of the highest honors of the Air Force Association and is given for the most outstanding contributions in aerospace education.

The Festival was awarded the Society of Developmental Society’s Viktor Hamburger Prize.  This award, established in 2002 in honor of noted professor and embryologist Viktor Hamburger, recognizes individuals and organizations who have made outstanding contributions to developmental biology education, including establishing and administering programs that disseminate reliable information about this field to students and the general public. 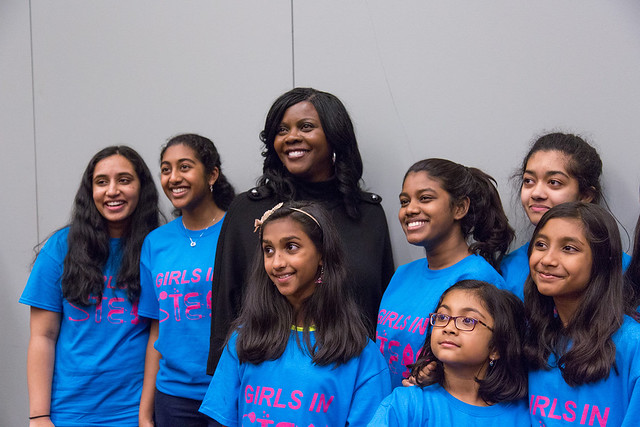 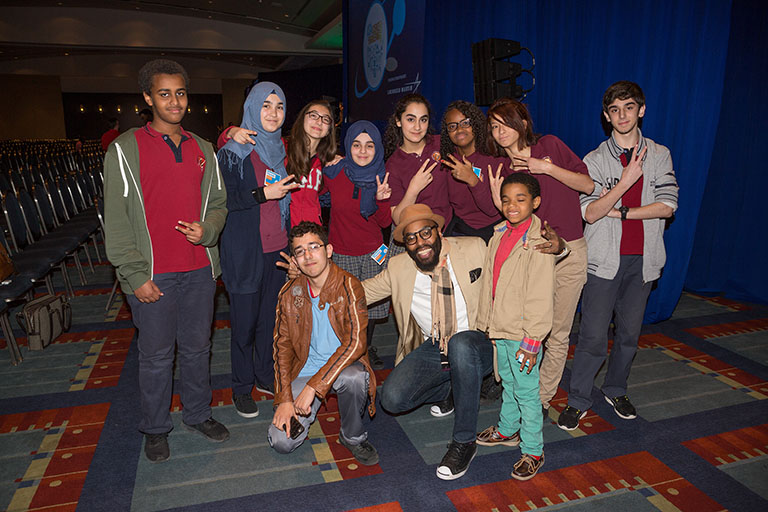 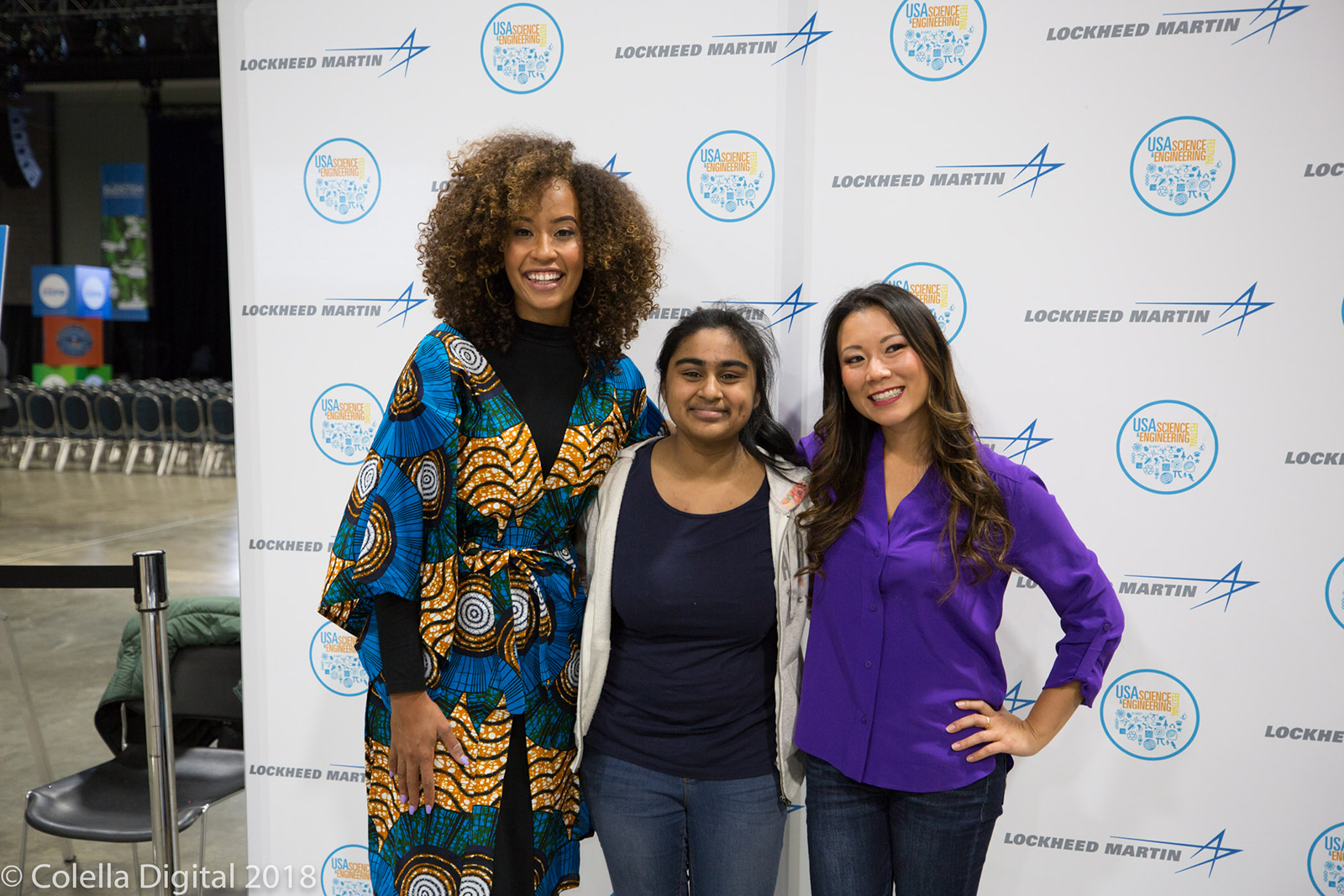 “As an educator, I truly feel the Nifty Fifty Speaker presentations are one of the most effective means to motivate students to consider pursuing STEM-related careers.   Having these experiences at the elementary school level is key in inspiring students to participate in STEM courses, clubs, and camps in middle school and high school.   Thank you!!!” Teacher, Nifty Fifty Participant

Learn more about the USA Science & Engineering Festival programs, events and initiatives by contacting us directly.