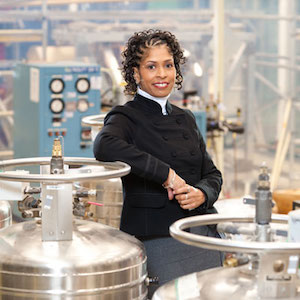 A Trailblazing Aerospace Engineer Gives Back By Inspiring Others

In her lofty career as an aerospace engineer and instrument manager at NASA’s prestigious Goddard Space Flight Center, Aprille Joy Ericsson has played a key role in designing spacecraft and instruments that contribute to our greater understanding of the Sun-Earth connection, space science and Earth itself.  But her inspiration to pursue a life of science and engineering began as a youngster while viewing milestone NASA spacecraft launches on TV as well as participating in unforgettable science outreach experiences as a student.

Says Aprille: “There were several instances that fostered my interest during childhood:  The first was watching the Apollo missions on TV in school in first grade; the second was me winning second place in the 8th grade science fair where I built my first science instrument, and third, attending the MIT UNITE science outreach program for minority students (now called Minority Introduction to Engineering & Science, or MITES) which I participated in during the summer of my junior year in high school.”

During the latter program, part of which took place at an Air Force Base in New Hampshire, she was able to sit in the aircraft control tower and fly in a flight simulator, even receiving a pilot’s score. “This experience really led me to my decision to explore the aerospace field,” she says.

Aprille, who currently serves as the Goddard Space Flight Center’s Program Manager for Small Business Innovative Research and Small Business Technology Transfer Research, is equally known today for her work to motivate other minority students in science and engineering. “Generally, I would say I am proof that one can achieve your career goals with meager resources,” she says. “But to make STEM fields more diverse and inclusive of all students, we need to check our biases at the door in order to be open to people who are different from us, or who think differently from us.”

Born the oldest of four daughters, Aprille grew up in New York City’s Bedford Stuyvesant neighborhood in Brooklyn, and later moved to Cambridge, MA where she lived with her grandparents and continued her schooling.  “My mother and my grandfathers were particularly encouraging to me during this time,” says Aprille. “Education and being the best you can be was very important to them.” Graduating from high school with honors, Aprille entered college at Massachusetts Institute of Technology (MIT) where she earned a Bachelor’s of Science degree in Aeronautical/Astronautical Engineering. While an undergraduate student there, she became actively involved in key aerospace projects through the institute, which would further shape and mold her career.

The majority of her engineering career has been spent working at the NASA Goddard Space Flight Center where she began as an aerospace engineer in the Robotics group, but soon after, she transferred into the area of Guidance Navigation & Control. There, she worked on key satellite design projects which were invaluable in predetermining the dynamics and structural reactions of these spacecraft.

She would go on to spearhead, or play an important role in, other multi-million dollar space initiatives such as NASA’s Tropical Rain Measuring Mission which helped observe the effects of weather cycles known as El Niño and La Niña in order to correlate their activity with crop productivity. Her other projects have included: the Wilkerson Microwave Anisotropy Probe and the Lunar Reconnaissance Orbiter (two of the “coolest” spacecraft for which she says she had the opportunity to design instrumentation), and the ICESat-2 Atlas (Ice, Cloud, & Land Elevation Satellite) — a $450 million laser altimeter instrument, which is expected to launch in 2016, that will provide measurements over the ice sheets of Greenland and Antarctica to quantify changes in ice-sheet mass that impact global sea level.

Aprille’s noted outreach activities in science and engineering include: serving with the Goddard Space Flight Center’s Speakers Bureau and the Women Group; serving as a mentor, instructor and advisor to students in aerospace, rocketry and mechanical engineering; and speaking at numerous science event locations, including the White House, the Women in Engineering Conference in South Africa; Oprah Winfrey’s Leadership Academy for Girls in South Africa, and serving as a Nifty Fifty speaker for the USA Science & Engineering Festival since 2010.

Says Aprille: “I feel obligated to continue to help spur the interest of minorities and females in the math, science and engineering disciplines. Without diversity in all fields the United States will not remain technically competitive.”

For her work and achievements, she has received numerous honors, including: Howard University’s College of Engineering, Architecture, & Computer Science Alumni Excellence Award; NASA’s Exceptional Achievement in Outreach Award, and the President’s Medal from York College.