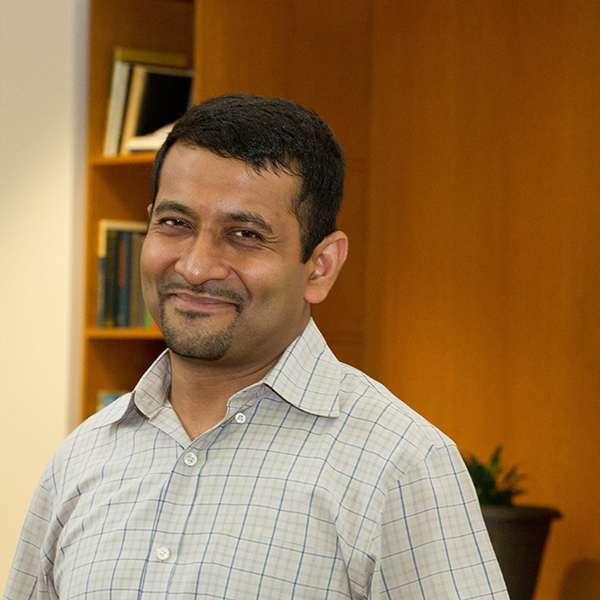 Pain. The word itself is enough to make one cringe. But to bioengineer Siddhartha Sikdar, pain — especially chronic pain, the biophysics of it and how to devise technology to localize and treat it at key trigger points — is a major focus of his research at George Mason University where he is also developing new diagnostic ultrasound techniques to deal with a wide range of other medical conditions.

And his work is very much needed: Chronic pain, for example, afflicts millions of Americans, especially those suffering from back and neck pain which commonly impacts soft tissues such as the ligaments, muscles, and surrounding areas. The economic impact of chronic pain is also significant, costing the nation in excess of $300 billion annually in lost productivity, according to recent statistics.

The good news is that research by Siddhartha — an associate professor of Bioengineering in George Mason’s Volgenau School of Engineering –along with other researchers, is making promising inroads into pain and its related complications.  For instance, Siddhartha and his lab have developed a biophysics-based method to quantitatively characterize key trigger points involved in chronic pain.

¨By using ultrasound techniques, we have found a noninvasive and easily accessible method to objectively describe these trigger points,” he says.

Patients with back or neck pain who often complain of trigger points or muscle knots, which are hard, painful nodules. These irritable nodules are often associated with referred pain, but not always. The reason why some hard nodules are spontaneously painful, and others are not, is unknown.

It is also not known why and how these trigger points form and what role they play in the pain syndrome. A major impediment to research on this topic has been the fact that these trigger points are diagnosed based on a subjective physical exam. Also, the only information that physicians have about pain severity involves the self-assessment from the patients themselves, which is notoriously non-quantitative.

In contrast, Siddhartha’s method, a variation of ultrasound called elastography, measures the stiffness of soft tissues by assessing regional tissue compression in response to an applied vibration. The more compression, the less stiff the tissue.  Another potentially important factor for the trigger point is regional blood flow, which can also be readily determined through Doppler ultrasound.

The overall thrust of our research,¨ says Siddhartha, ¨is the development of new diagnostic ultrasound techniques and applications and translating them from laboratory experiments into practical solutions that can be used in a clinical setting (bench to bedside).¨  In addition to pain, these innovations are also applied to other medical areas, including  cardiovascular dynamics and musculoskeletal imaging.

Besides his research at George Mason University, he is a principal investigator at the Krasnow Institute for Advanced Study and a guest researcher with the Rehabilitation Medicine Department at the National Institutes of Health’s Clinical Center.

Siddhartha received his Ph.D. in Electrical Engineering from the University of Washington, Seattle. From 2005-2007, he was a Senior Fellow in Bioengineering at the University of Washington and was the recipient of a postdoctoral fellowship award from the American Heart Association. He was awarded the National Science Foundation’s CAREER Award in 2010 and George Mason’s Emerging Researcher/Scholar/Creator Award in 2012.