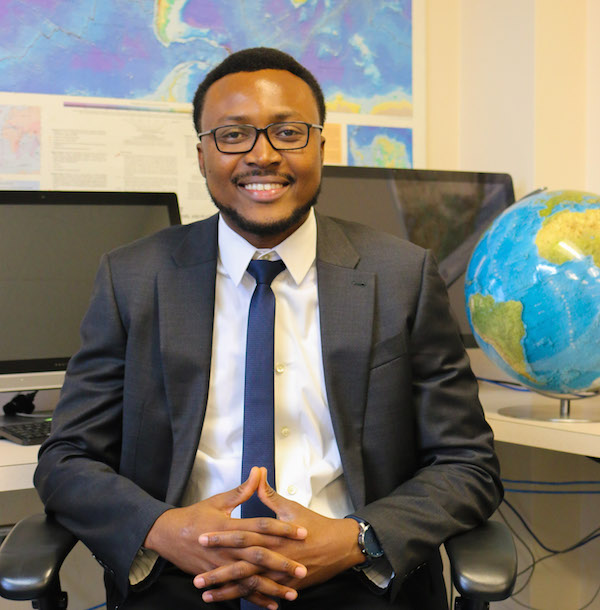 Growing up in his homeland of Lagos, Nigeria, Tolulope “Tolu” Olugboji loved using the computer to solve daunting problems in physics and mathematics — all the while dreaming of the day when he would be able to apply these skills in a challenging scientific career.  Today he is living out these aspirations as a geoscientist at the University of Maryland where he is a Research Associate in the Seismology Lab.

Says Tolu: “Our research helps us better explain various geological phenomena, including earthquakes, Earth’s structure, composition, and cooling history.”  His research is part of a vast scientific project funded by the National Science Foundation called EarthScope which is exploring geo-regions beneath the continent,  as well as our entire Earth, to further understand the materials it is made of, how it was assembled, and how it works — including its recurring earthquakes and active volcanoes.

“The better we know the Earth, the better we can explain its dynamics, how it evolved and what makes it unique from other planets,” says Tolu.

He joined the University of Maryland in 2014 after completing his Ph.D. from Yale University, and his Bachelor’s of Science degree from Obafemi Awolowo University in Nigeria.

As an emerging geoscientist, Tolu is already making his mark. One of his successes involves research he completed as a Ph.D. student at Yale with 2 other colleagues which was published recently in the prestigious journal, Nature Geoscience.  In the article, Tolu and his co-authors, propose a new model to explain the drop in elastic stiffness in the middle of Earth’s continental lithosphere. Lithosphere is the stiff layer of rock that lies atop the slow-motion convection of Earth’s solid, yet ductile, interior (asthenosphere). It is the “plate” of plate tectonics, the system of interlocking fragments, that explain earthquakes, volcanoes, and even the long-term variation of carbon dioxide in the atmosphere.

In their unprecedented theory, Tolu and his co-authors propose that the drop in elastic stiffness of continental lithosphere is a natural consequence of the way rocks deform as temperatures rise (below the melting point), but this process will not soften the materials in the geological time scale.

While Tolu has enjoyed success in his young career, coming to America as an undergraduate to pursue his  Ph.D. education at top-rated Yale was a challenging adjustment that at times shook his confidence.  “It was frightening for me sometimes just wondering if I was good enough to be there,” remembers Tolu, whose father is a construction manager and a member of the clergy in his hometown of Lagos, Nigeria, and his mother, a high school teacher/administrator.

But through the help of mentors, Tolu regained his self-confidence and adjusted well to the rigors of postgraduate work.

What advice would he give young students who aspire to enter science or engineering?   “Seek out good mentors to guide you and keep you focused, and most importantly believe in yourself and follow your passion,” he says. “Also, as you get older, join professional organizations that relate to the field you would like to enter, and read professional journals to learn the scope of science.”