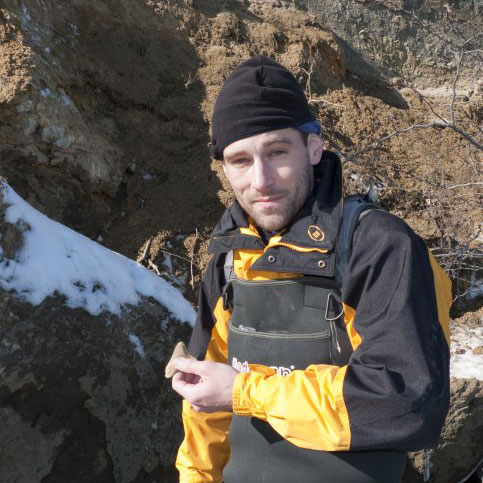 Taking Paleontology Discovery To The Classrooms Of America!

Research scientist Aaron A. Alford readily admits that his childhood love of “finding critters in the woods” has never left him. In fact, it’s only grown stronger over the years. While completing his Ph.D. in Psychiatric Epidemiology at Johns Hopkins University, Aaron put his unique finding skill set to good use by exploring the fossil exposures of the central Atlantic Coastal Plain. He has since found, recovered, prepared and donated thousands of fossil specimens to museum collections for research purposes and to schools as teaching aids.

Aaron is applying his passion for finding to many realms of discovery, including his former role as Paleo Quest’s Director of Science and Education. The non-profit organization was designed to advance research in the natural sciences through exploration, education and material donations to researchers and museums. During his time at Paleo Quest, Aaron helped pioneer several cutting-edge research methods in paleontology, such as stratigraphically-targeted underwater exploration and field jacketing methods.

“Our research innovation, communications and outreach at Paleo Quest has led the organization to collaborations with the JASON Project, National Geographic, the Sea Research Foundation and the Smithsonian [Institution],” Aaron said. “With these collaborators, Paleo Quest and its researchers are expanding their STEM educational outreach to include hundreds of thousands of students worldwide.”

Paleo Quest has made hundreds of fossil discoveries, some of which have led to the identification of new species. The organization regularly donates its findings to Maryland’s Calvert Marine Museum and other museum collections.

Aaron is a psychiatric epidemiologist by training and a research methodologist by profession. He specializes in evaluation methods, risk and protective factors to address substance abuse, anti-social behavior and other problems of thought and behavior. In addition, he uses his expertise in research methods to serve as Director of Research and Evaluation for the National Network of Public Health Institutes’ (NNPHI) research and evaluation initiatives and as host researcher/research lead/STEM mentor at JASON Learning/National Geographic/Sea Research Institute. He received his Ph.D. from Johns Hopkins University and his M.P.H. from George Washington University.

In the realm of paleontology, Aaron’s work has resulted in the first stratigraphically-controlled evidence of protocetid whales in Virginia as well as locating new species of marine mammals. Other discoveries have included identifiable and stratigraphi¬cally-controlled baleen whale fossils from the lower Calvert Formation that predate any known specimens by nearly five million years. These specimens, along with thousands of others, are currently curated at the Calvert Marine Museum.

Aaron and his colleagues at Paleo Quest also designed several citizen science programs, including Shark Finder™. True to its name, Shark Finder™ is aimed at finding fossil elasmobranch (shark, skates and ray) remains along the Atlantic Coastal Plain. To date, elasmobranches have been poorly characterized despite the fact that shark fossils from this region have been a favorite of collectors and paleontologists for more than a century. Shark Finder™ allows classrooms and citizen scientists to search through highly concentrated fossil-bearing media to find and report shark fossils. In return, participants who make significant finds are acknowledged in professional publications and may have the opportunity to name a new species.
Click here for more information.