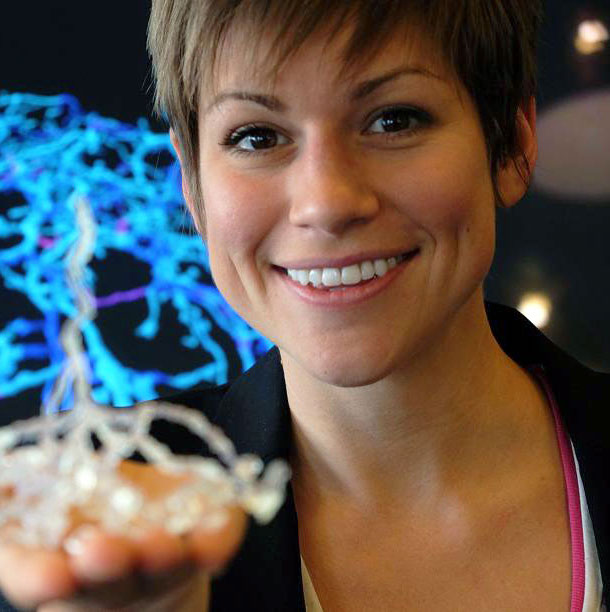 Amy Sterling:  Leading the Crowdsourcing Efforts at EyeWire: The Amazing Video Game That is Helping Scientists Map the Human Brain

In their quest to uncover the mysteries of the human brain, neuroscientists are receiving assistance from an unlikely source: an online video game called EyeWire. Amy Sterling is Executive Director of EyeWire, the virtual reality game that is designed to help researchers map the brain. EyeWire was launched over four years ago and is among a growing number of citizen science endeavors that is flourishing through crowdsourcing (the practice of obtaining input into a task by enlisting the services of a large number of people, typically through the Internet).

Amy crowdsources video-game players by having them join hundreds of thousands of other participants around the world in playing EyeWire to solve challenging 3D puzzles, and in the process, players produce data of their neural activity. This data is used by neuroscientists to chart synaptic connections and model circuitry in 3D maps, yielding important visual results not possible through artificial algorithms or normal computers.

“The brain is this incredible place for data visualization,” Amy explains in an interview with the publication, Fast Company. Under her leadership, EyeWire has earned top prizes from the science community. Its visualizations have even been displayed in New York’s Times Square, and its player base has increased to more than 200,000.

She is the recipient of key honors for her achievements, including speaking in 2014 at the White House at the Office of Science and Technology Policy’s first workshop on citizen science. Amy attended Auburn University, studying Wireless Engineering and Mathematics.