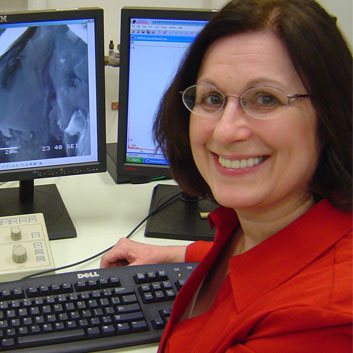 Using Science and Engineering to Inspire Others at the Naval Academy

“I like to build stuff, but I also really like to figure out why things break, says Angela Leimkuhler Moran in describing her role as a Materials Engineering scientist at the U.S. Naval Academy where she conducts research to help assure that metals and other material that make up some the Navy’s most vital equipment (such as aircraft, sea vessels and weaponry) can withstand the stress and demands of their use.

Her best memories as a kid growing up in Catonsville, MD, just outside of Baltimore, are of working with her dad (a civil engineer) “fixing things around the house, mixing concrete.”

Those days are not far from her mind as Angela today inspires other kids to pursue careers in science, technology, engineering and math. Despite her busy schedule at the Naval Academy in Annapolis, MD – where she also serves as faculty professor in the Mechanical Engineering Department, teaching Design, Manufacturing and Materials classes to midshipmen – Angela conducts intensive outreach programs at the academy in science and engineering for elementary, middle and high school students. Her outreach has touched youngsters in virtually all 50 states and Guam.

Looking back on her life, Angela says it was her deep curiosity about the inner workings and construction of things, in addition to a love of math and science, that motivated her to pursue Materials Engineering, a challenging technological field which studies the properties and applications of a wide range of materials (including metals, plastics, carbons, ceramics, semiconductors and polymers) at the molecular and macroscopic levels.

The importance of this field cannot be understated since virtually everything we come in contact with each day – from the cars we drive to the cell phones we use – is made up of complex materials. Scientists in this field are especially interested in how such materials can be further developed and enhanced to meet technology’s ever-changing demands.

“I have worked for the Navy for more than 25 years, first in the research and development at the Naval Surface Warfare Center,” says Angela, “and I especially enjoy doing materials characterization and mechanical property testing.”

What is it like teaching at one of the premiere military academies in the world? “ It’s quite challenging,” she says.” I was hooked on teaching at the Naval Academy after serving there for a year as a visiting professor while still working at the Surface Warfare Center,” says Angela. “The midshipmen are very bright and very motivated. I have had the pleasure of working on individual research projects with more than 50 of the students.”

Angela became inspired a few years ago to begin outreach in science, technology, engineering and math (STEM) to young kids after reading the book Halftime, a story about giving back to others. She says: “I had also just completed my 25-year anniversary with the Navy and realized how fortunate I had been in my career, including being able to accumulate over $25 million in research grants and winning a few nice awards (like Young Engineer of the Year in Maryland, and Outstanding Women Engineer in the Federal Government). I started reading about the desperate shortage of engineers and how numbers for minorities and women in engineering still looked bleak . I decided it was time to change course, stop spending so much time alone in the lab and spend more time spreading the word about engineering and other STEM fields.”

Angela and a number of other Naval Academy faculty had been offering STEM outreach activities at a grassroots level, but over the past few years she began focusing on centralizing and expanding the STEM programs and resources at the academy. “We now offer summer camps, minicamps on weekends and evening courses, tours, engineering and science days – – all involving our own midshipmen engineering students who serve as mentors, touching local kids as well as kids across the country.”

What advice would Angela give to students interested in pursuing science and engineering as careers? “First, learn more about what scientists and engineers do, especially how they make the world a better place through their work. Kids must realize that science and engineering touch every aspect of our lives –our cars, our food, electronic devices, environment and infrastructure.”

She also advises young students: Don’t be scared to take the tough classes. “If you like math and science, you are off to a great start, but you need to develop other qualities as well,” she says. “For example, engineers do need to solve problems and learn how things work, but they also need to be creative, resourceful, good communicators and team players.”