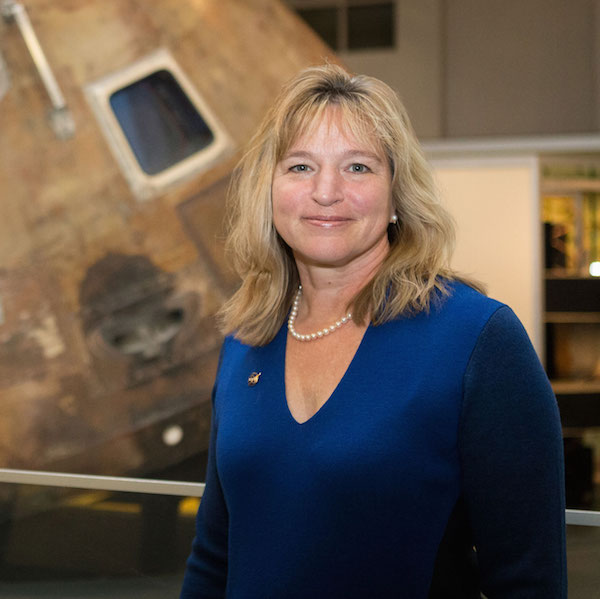 If you want fascinating insights into the terrain of Venus, Mars, or the Saturn Moon Titan, planetary geologist Ellen Stofan is the person to ask. As NASA’s former Chief Scientist, she is also the go-to expert on a host of other challenging frontiers in space exploration.

In her role as Chief Scientist, Ellen — who has also held a number of senior scientist positions at NASA’s Jet Propulsion Laboratory in Pasadena, California — served as principal advisor to NASA Administrator Charles Bolden on the agency’s science programs and science-related strategic planning and investments.

A pioneer in her own right, Ellen, who holds a Master’s and Doctorate degree in geological sciences from Brown University, is an associate member of the Cassini Mission to Saturn Radar Team and a co-investigator on the Mars Express Mission’s MARSIS sounder. She also was principal investigator on the Titan Mare Explorer, a proposed mission to send a floating lander to a sea on Titan.

At the Jet Propulsion Laboratory from 1991 to 2000 she held such high-profile posts as chief scientist for NASA’s New Millennium Program, deputy project scientist for the Magellan Mission to Venus, and experiment scientist for SIR-C, an instrument that provided radar images of Earth on two shuttle flights in 1994.

What inspired her to enter the field of planetary science? “Well, that’s kind of an unusual story,” says Ellen with a smile. “I’m actually a NASA brat. My father was a rocket scientist. He started working at NASA before it was NASA in 1959. I grew up in this business… A lot of my life has been centered around this question — about how NASA is helping us to understand our own home planet … and to understand our place in the universe.”

Today, she is an Honorary Professor in the Department of Earth Sciences at University College London and is co-chair of the World Economic Space Council. She has received many awards and honors for her work, including the Presidential Early Career Award for Scientists and Engineers. Ellen has also has authored and published numerous professional works, including the book, Planetology: Unlocking the Secrets of the Solar System, which she co-authored with former NASA Space Shuttle astronaut Tom Jones.