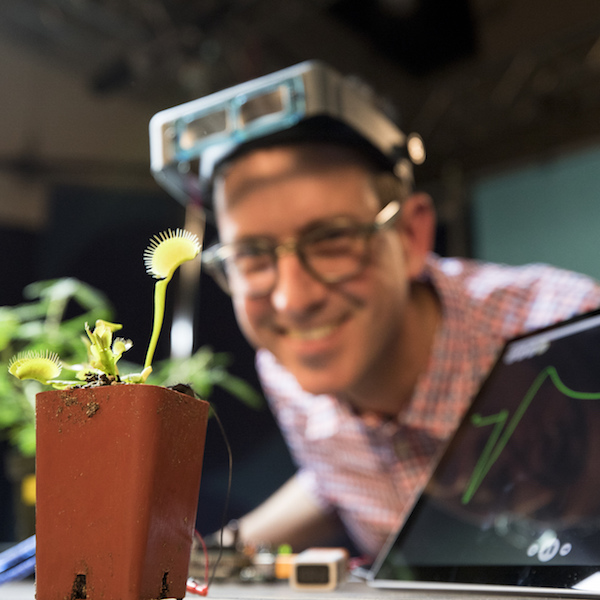 How exactly does the brain — that mysterious 3-pound snarl of nerve tissue we all possess — really function? Although researchers are still working to obtain more insight into this question themselves, neuroscientist and biomedical engineer Greg Gage is empowering students, teachers and the general public to better study and understand the brain by making available to them much of the same research experiments and tools that neuroscience professionals use.

This is the purpose of his brainchild — Backyard Brains, the innovative science education service which he co-founded with his partner, neuroscientist and biologist Tim Marzullo. With their colleagues at Backyard Brains, Greg and Tim design and build hands-on experiment kits and materials — ranging from their popular “mind controlling” Human to Human Interface and RoboRoach neuro-cyborg kits — which make brain science and electrophysiology come alive for learners!

“Schoolchildren and others are generally quite interested in how the brain functions,” says Greg, (who worked as an electrical engineer making touchscreens before becoming a neuroscientist), “however neuroscience education for the public is hampered by a lack of low-cost and engaging teaching materials.”

This especially became apparent to him as a graduate student at the University of Michigan where he and fellow grad student Tim often interacted with enthusiastic schoolchildren during neuroscience outreach events. “Many times we wanted to show real ‘spiking’ activity [the electrical activity of neurons] to students, but this was impossible due to the high cost of equipment. So, to address this, we began using off-the-shelf electronics to design and build kits that could provide insight into the inner workings of the nervous system.”

Today, based in Ann Arbor, Michigan, Backyard Brains carries on this mission while gaining a loyal following of students, teachers, parents, professors, and Do-It-Yourself (DIY) neuroscientists nationally and worldwide. “We now serve customers in all 50 States, and on all seven continents,” Greg says proudly.

Inspiring kids at an early age to learn more about the brain can also have long-term impact on encouraging more students to pursue neuroscience as a career, he says. “When it comes to the brain, we’re in the dark ages. One out five of us will be diagnosed with a brain disorder that still has no cures. By getting more people involved … we can inspire those interested to become neuroscientists, and perhaps cure brain diseases like Alzheimer’s and Parkinson’s.”

Greg’s popular repertoire of neuroscience learning devices include: The Neuron SpikerBox, the open-source DIY tool that can be used with a smartphone, iPad or computer to monitor spiking and other brain activity in real time; The RoboRoach, the world’s first commercially available cyborg, gives students hands-on insight into neurostimulation; The Human to Human Interface, which allows one person to take away the free will of another; and the Plant SpikerBox, which peers into how plants communicate using similar techniques as our own brains!