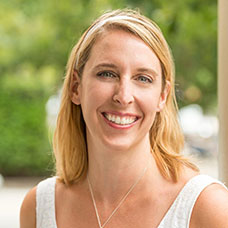 Safeguarding Our Interaction on Facebook and Other Social Media

As our online interaction with social media increases, so is the level of personal information gathered about us from such behavior.  For instance, from the “likes” that individuals posted on Facebook pages about curly fries, thunderstorms, and The Colbert Report, a group of computer wonks studying this social media behavior determined that these people were highly intelligent!

But the information gleaned from our online interaction can take on a more serious note, especially where privacy and security are concerned, says computer scientist Jennifer Golbeck, Professor of Information Studies, and Director of the Social Intelligence Lab at the University of Maryland, College Park.  Her research focuses on analyzing and computing with social media, and creating usable privacy and security systems for online interaction.
“And it’s not just social media,” Jennifer says. “Personal information also can be gleaned from your search browsing histories, search queries and purchase histories.”  The best thing to remember, she admonishes, is anything that happens online is far from private. And even if you’re extra careful, your behavior is all that’s needed to determine who you are.

An important part of her many public presentations about online behavior centers on what can be done to return the control of online information to its rightful owners: the private internet user and consumer.

“Information on how one interacts with his or her own friends and followers on sites like Facebook and Twitter is in high demand,” says Jennifer in explaining  how our love affair with social media began, and why a growing number of entities  — ranging from market researchers to behavioral scientists — are interested in accessing such data.

“Facebook, for example, has 1.2 billion users per month — so half the Earth’s internet population is using Facebook,” she says. “This and other social media sites have allowed people to create an online persona with huge amounts of personal data online. So the result is that there is now behavioral, preference and demographical data for hundreds of millions of people available online– which is unprecedented in history.”

And as a computer scientist, Jennifer’s use of such data is more altruistic in that she uses it to improve the way that information is shared and accessed online. “I have been able to build computer models that can predict all sorts of hidden human attributes for data that you don’t even know you are sharing information about. I use that information to study the way people interact online and to create privacy and security safeguards.”

Equally important, she educates the public about such interaction while trying to move that control back into the hands of users.

She began studying social media from the moment it emerged on the web a decade ago, and is one of the world’s foremost experts in the field. Her research has influenced industry, government and the military.

In addition to her work at the University of Maryland, she writes for top online news organizations, including Slate and The Atlantic, and appears frequently on NPR and commercial talk radio.
For more information, http://www.cs.umd.edu/~golbeck/