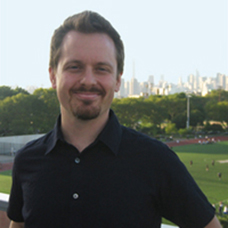 Smithsonian Anthropologist Joshua Bell: How the Cell Phone Stands to Change Us as Humans

No question about it: The cell phone, since introduced in 1973 by engineer Martin Cooper, has revolutionized our everyday lives, literally becoming an indispensable technological appendage for us all –from the jet-setting business professional to the elementary school child.

The phenomenal growth and impact of these mobile devices on our global society is a focus of study by anthropologist Joshua Bell, curator of Globalization and Anthropology at the famed Smithsonian National Museum of Natural History. Joshua is particularly interested in how cell phone technology is shaping our modern lives, and in the process, how it stands to change us as humans.

“Cell phones are more than just man-made objects, but something that connects different people and different places around the world,” says Joshua. In fact, using this theme, he and his research colleague Joel Kuipers, an anthropologist at George Washington University, are developing a new exhibition, titled “A Natural History of the Mobile Phone.” The exhibit explores the intersection of mobile phones and globalization via a pair of different approaches: the ecological impacts of phone production, and the cultural variability with which phones are used globally.The exhibit draws on the research that they have been doing on cellphone repair and the use among teenagers in Washington DC since 2012.

Mobile phones, Joshua explains, are constructed using hundreds of different chemicals, elements and components from around the world. “If you think about anything you consume, all of its components come from somewhere else,” he says.. “Your phone is not just connecting you to your parents or children that you talk to on it, but also to other cultures and entities around the who played a part in constructing your phone — such as Chinese workers in an electronics factory who are maybe being paid substandard wages.” These connections, he adds, have human and ecological consequences, and since the average American now buys a new phone every two years, the impacts on the globe can be steep.

Joshua’s research also involves exploring the cultural dimensions of cell phone use in different countries and in different communities around the world.

Looking further ahead, he suggests our dependence on mobile technology also raises inevitable and possibly troubling questions of personal privacy and identity theft — situations involving cell phones that could let individuals hack and steal specified information from each other. “It doesn’t take much to envision a world where people access different apps that could both activate or suppress different genomic make-up or amplify our capacities,” he says.

In addition, as the current DYI movement and “Maker Culture” matures, Joshua can envision a time in the future when cell phone users will be able to repair, rewire and modify their own mobile devices without the need to replace them every two years.

“Someday, in a sense, he says, “we’ll all be “hackers” and be able to make changes to our own technology instead of merely purchasing new models. “Does that mean I think in 100 years from now we’ll all be engineers?” he asks. “I’m not so sure. But regardless of individuals’ professions, some basic technical literacy will be essential.”

As an internationally known anthropologist, Joshua is also recognized for his work in the Purari Delta of Papua New Guinea where he is studying and documenting the social, ecological and economic impacts of large-scale logging and oil/gas exploration on the people of this region. In addition, he serves as director of a collaborative, multi-disciplinary Smithsonian program called “Recovering Voices” — which aims to preserve and sustain an estimated 6,000 endangered languages which are spoken in indigenous communities worldwide today.

After earning his Ph.D. in Anthropology from Oxford University in 2006, Joshua taught at the University of East Anglia for three years before joining the Smithsonian in 2008.