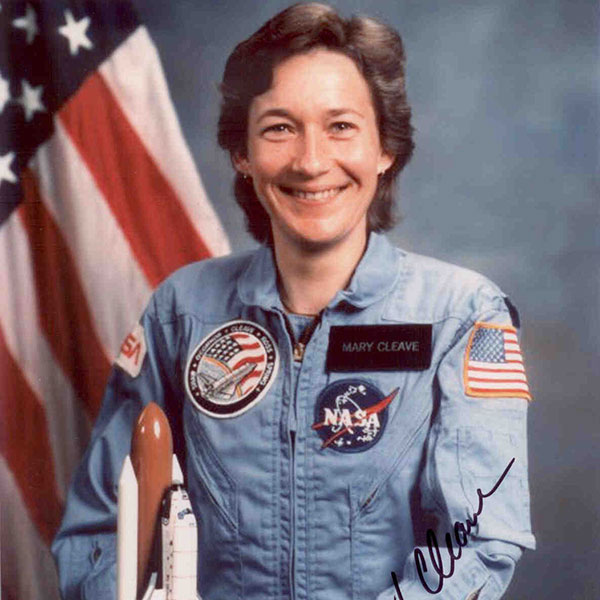 View From Space: A NASA Shuttle Flight Veteran Shares Her Fascinating  Experiences as an Astronaut and Environmental Engineer!

As a veteran of two Space Shuttle missions during her career at NASA, Mary Cleave was privileged to fascinating, breath-taking views of Earth and its lower atmosphere that few of us will ever experience.  It was those glimpses of the planet that would come to impact her career — reinvigorating her focus as an environmental engineer to protect the Earth and  its atmosphere.

“In space, I had the opportunity to really see how tiny and fragile the Earth is,” says Mary, who after her two Shuttle flights in the 1980s would go on to become NASA’s Associate Administrator for Science — a position  in which she was responsible for monitoring numerous spacecraft, ranging from those located at the edge of our Solar System to those orbiting the Sun.

“The Earth’s atmosphere is a thin, little layer. So, one event in one place of the planet impacts the entire globe,” says Mary, who retired from NASA in 2007.

She adds enthusiastically: “Everyone needs to understand that studying the solar system, the earth and the universe is important. We need to put ourselves in context and realize the important part we all play in preserving the Earth.”

Mary was selected as an astronaut in May 1980. In her two flights on the Atlantis Shuttle as a mission specialist, she logged a total of 10 days, 22 hours, 2 minutes,  and 24 seconds in space, which included orbiting the Earth 172 times and traveling 3.94 million miles.

Her first mission — which took place November 26 to December 3, 1985 — was noted for such achievements as deploying important communications satellites, and conducting two six-hour spacewalks to demonstrate Space Station construction techniques, in addition to carrying the heaviest Shuttle payload weight to orbit to date at that time.

Her second mission, from May 4-8, 1989, successfully deployed the Magellan Venus-exploration spacecraft, the first U.S. planetary science mission launched since 1978 and the first planetary probe to be deployed from the Shuttle. (Magellan arrived at Venus in August 1990 and mapped over 95% of the surface of Venus.)

As a mission specialist, Mary, on the flight in 1985, was  the flight engineer and operated the robot arm on the Space Shuttle, in addition to conducting key experiments such as growing crystals in space. On the Shuttle mission in 1989, she deployed the Magellan spacecraft.

She explained that during her first flight, she was the only crew member who was a civilian and a non-veteran. “I heard unbelievable stories from the veterans,” she recalls. At the end of the  veteran fighter pilots became environmentally aware after looking at the Earth from space, she contends.

In her public speaking engagements today, Mary is on a personal mission to inform and excite students and others to about the Earth, space and the ocean, including sharing with audiences the insights that NASA’s Shuttle missions and  other scientific endeavors have revealed about  atmospheric science, climate change, oceanography and other realms.

Before joining NASA, she held research posts at the Ecology Center and the Utah Water Research Laboratory at Utah State University.

She currently serves on corporate boards and advisory committees in both for profit and not for profit sectors.

In 1991 she joined NASA’s Goddard Space Flight Center in Greenbelt, Md., where she worked as the project manager for SeaWiFS (Sea-viewing, Wide-Field-of-view-Sensor).  She managed this project during the development and early operational phase. The project goal of SeaWiFS was to provide global measurements of all of the Chlorophyll a on Earth every 48 hours.  The spacecraft launched in August 1997 and operated successfully for 13 years. The data from the spacecraft helped  scientists increase our understanding of climate change, oceanography and atmospheric science.

She also served in a range of technical and engineering capacities supporting the Shuttle program, including CAPCOM (capsule communicator) for five shuttle flights.

Long considered a role model in science and space exploration for her achievements, Mary is the recipient of various honors, including  being the recipient of the American Astronautical Society Flight Achievement Award (1989); NASA Exceptional Achievement Medal (1994), and being profiled with Sally Ride, Anna Fisher and other U.S. women astronauts in the Women In Space DVD, and The Women’s Adventures in Science book series.

Click here for more information on Mary Cleave and many others who have flown in space: http://www.space-explorers.org/