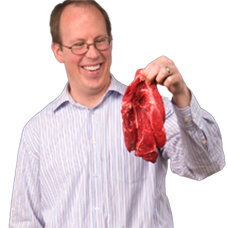 Revealing the Secrets to Delicious Cooking Through Chemistry!

Ever wonder what the secret is to making perfect ice cream? Or how to make a delectable macaroni and cheese dish, or to-die-for jellies and jams? No, you don’t have to go to culinary school to learn. Try attending ¨The Chemistry of Cooking¨, a wildly popular undergraduate chemistry course taught by professor Matthew Hartings at American University.

¨I love to cook,¨ admits Matthew, who is one of the nation’s leading researchers in the emerging field of bioinorganic chemistry. ¨And, because I’m such a chemistry nerd, geek and wonk, I also love teaching others about the science of cooking.¨

His ¨Chemistry of Cooking¨ course, which is meant for undergraduates not majoring in science, has gotten rave reviews among students for helping to make chemistry more relevant and interesting.

¨We often don’t realize it,¨ Matthew tells students, ¨but we’re a chemist each time we step into the kitchen to make or cook something.¨ To get this across in class, he discusses the molecular components of food and the reactions those ingredients undergo during cooking. He also guides students through hands-on lab experiments in which they learn to make foods that they learn about.

For example, he says, when it comes to making the perfect ice cream — the creamier the better is always paramount, mainly due to how ice crystals affect ice cream and its consistency. ¨There’s two things you can do ensure your ice cream is the creamiest,¨ Matthew explains. ¨First is to use an emulsifier to control the size of the ice crystals in your ice cream. The smaller the crystals, the creamier the ice cream.¨ Ice cream is essentially just water and fat, he continues, and these components naturally want to separate, but using an emulsifier can bring the water and fat molecules together. ¨That will increase the chance of small ice crystals. The second thing you can do is freeze your ingredients together as fast as possible. The faster the ice cream freezes, the smaller the crystals and the creamier it is.¨

In fact, Matthew shares this process with the public in a popular video titled ¨Ice Cream Science¨(produced by the American Chemical Society) on the YouTube channel, Reactions.

When he is not educating students on the science of cooking, Matthew can often be founding in his laboratory at American University where he is studying the way proteins use metals for all sorts of amazing things—photosynthesis, respiration, digestion, and therapy.

“This area of study,” Matthew says, ¨is broadly termed bioinorganic chemistry (Bio for biology and inorganic for metals).¨ His work in this field mainly involves ¨playing chemical tricks on proteins to make them do new things,¨ which in his lab specifically includes treating cancer and converting sunlight into energy.

Matthew earned his Ph.D. in Chemistry from Northwestern University, and his Bachelor’s of Science degree in Chemistry and Physics from the University of Dayton.

What advice does he have for aspiring chemists? ¨I have three pieces of advice,¨ he says: (1) Make time to get lost in your work. (2) Practice sharing your science and your enthusiasm, and (3) Be uncompromisingly proud of the work that you do.