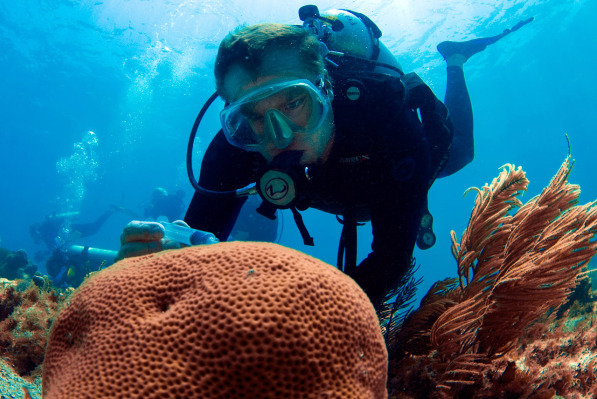 Dr. Mike Heithaus is Dean of the College of Arts, Sciences & Education (CASE) and Professor in the Department of Biological Sciences at Florida International University (FIU). At FIU, he served as the Director of the Marine Sciences Program and was the founding Executive Director of the School of Environment, Arts and Society (SEAS).

A marine ecologist, specializing in predator-prey interactions and the ecological importance of sharks and other large marine species like dolphins and sea turtles, Mike joined FIU as an Assistant Professor in Marine Biology in 2003. His research includes investigating the ecological consequences of overfishing large predators, predator-prey interactions, and the ecology of seagrass ecosystems, coral reefs, and deep-sea communities of the Gulf of Mexico. He has published more than 160 scientific papers and book chapters, co-edited four books on sharks, and attracted over $8 million in research support.

Committed to research and to communicating science, Mike works on many environmental research projects and outreach activities. He can be found studying sharks and other marine creatures in remote areas of the world like Moorea, French Polynesia, the Everglades, and Western Australia, or speaking to kids and their teachers, in person or virtually, at K-12 schools across the country. He has co-written two high school science textbooks, is an author on national K-8 science programs, and a member of the Science Advisory Committee for Pew Environment’s Global Shark Program.

Mike has been involved in the production of more than a dozen natural history documentaries, including three featured on Shark Week, and has hosted a National Geographic Channel television series. He also hosts and produces – along with Patrick Greene of SymbioStudios – science and math videos for students and teachers in K-12 classrooms around the country.