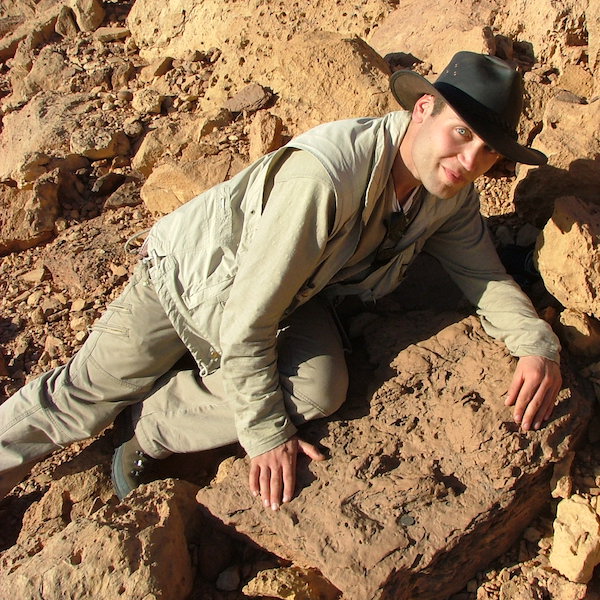 Let This Noted Paleontologist Take You Inside the Age of Dinosaurs!

One of the fastest rising paleontologists on the international scene today, Dr. Nizar Ibrahim scours the Sahara Desert of North Africa for clues to life in the Cretaceous period — a thriving prehistoric era known as the last stage of the “Age of the Dinosaurs”. His achievements during his career have included unearthing many dinosaur bones and fossil footprints, as well as discovering a new species of prehistoric flying reptile that is known to have had a 20-foot wingspan while living 95 million years ago. His team also uncovered remains of giant prehistoric fishes, crocodile-like hunters, and turtles.

Nizar is a paleontologist, comparative anatomist, TED Fellow, and National Geographic Explorer who sums up his pursuits into the prehistoric world of the Sahara this way: “Paleontology is like detective work. It’s amazing to piece together clues and re-create a hundred-million-year-old landscape where gigantic predators flourished and enormous evolutionary changes unfolded.”

In his work, he led several expeditions to Morocco and has also taken part in fieldwork in Niger, the UK, France, and Spain. His investigation into North African fossil assemblages is particularly important because northern Africa and the mid-Cretaceous period are underexplored and underrepresented in paleontology.

Nizar currently serves as Assistant Professor of Biology at the University of Detroit Mercy (USA), where he teaches Evolution, Human Anatomy, and Comparative Anatomy. He earned his Ph.D. from the School of Medicine and Medical Science at University College Dublin (Republic of Ireland) and his Bachelors of Science degree in Geology and Biology from the University of Bristol, United Kingdom. Additionally, he has received worldwide media attention, including being covered by such news outlets as the BBC, National Geographic, the Wall Street Journal, The New York Times, Fox News, CNN, Sky News, ABC News and many others. The discovery of new remains of the giant predatory dinosaur Spinosaurus was included in Discover Magazine’s “Top 100 Science Stories of 2014”. He was also one of the principal scientific advisors for the landmark BBC series “Planet Dinosaur” and the principal advisor for the NOVA/National Geograhic special “Bigger than T.rex”.