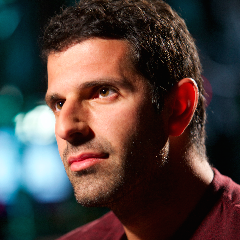 Not only does the first name of Spyridon Michalakis have the classic sound of a superhero, this physicist at Caltech’s Institute for Quantum Information and Matter (IQIM) was even the scientific advisor for the movie, Ant-Man, as well as the upcoming sequel, The Wasp.

Serving as a consultant to Hollywood filmmakers on the physics of Ant Man is an interesting complement to the lofty research that Spyridon (who goes by Spiros) does at IQIM in areas of quantum many-body physics and the emergence of spacetime from quantum entanglement.

About his role as a science consultant, Spiros prefers that the science be interesting, even if it is not as accurate as possible: “It’s more important to make things interesting. Think about the original Star Trek. Back then we’d have said, “Oh yeah, that’s bull.” You don’t have teleportation; you don’t have warp drives. But my research is on exactly this. How do you break the laws of physics? Where does time come from? In the case of Star Trek, science fiction informed our decisions on what to research.”

As far as Ant-Man’s superpowers go, Spiros says: “The benefits and drawbacks of Ant-Man derive mostly from the same principle: Certain properties, like strength and heat dissipation, are proportional to surface area and not volume. When volume decreases a thousand times, surface area decreases only one hundred times. That mismatch leads to superpowers and super-weaknesses alike. But, again, thank the gods for Ant-Man’s super-suit, which makes up for the negative side effects of shrinkage.”

Spiros grew up in Greece, solving math puzzles and playing volleyball with his brothers. After high school, he moved to the U.S. to study Math and Computer Science at MIT, before coming to sunny California for his PhD in Applied Mathematics at UC Davis. He is now at Caltech, where he splits his time between research on theoretical quantum physics and outreach for the Institute for Quantum Information and Matter.

In addition to his current work as a physics researcher at Caltech, Spiros also serves as the staff advisor for Caltech’s Chapter of InnoWorks, and contributor to IQIM’s science blog, Quantum Frontiers.
Always fun-loving, he is also collaborating with Project Runway’s Alicia Hardesty and Caltech’s Crystal Dilworth on a fashion line that will “redefine nerdy.”