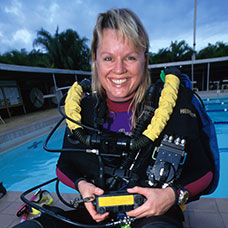 A widely celebrated underwater explorer and cave diver — and one of the few women in the world to rise to prominence in these fields — Jill Heinerth in her 30-year career has traversed the globe, diving in some of the most fascinating and dangerous places, and along the way, chronicling her work and adventures through production of award-winning underwater films and photography.

A native of Canada, Jill has loved the water since childhood. In her exploration, which includes mapping remote cave systems all over the world, she´s plumbed the depths of watery caves underneath the remote Ural mountains of Siberia, dived with mighty manatees (sea cows) near the Gulf of Mexico, and explored sacred desert springs in Africa. In 2000 she was involved in one of her most ambitious projects to date — diving inside a giant iceberg to search for never-before seen ecosystems.

Jill was a lead technical diver on the ground-breaking Wakulla2 project, where she piloted the first 3D underwater cave mapping device – technology bound for space. A pioneer of technical rebreather diving, she led a team into underwater caves beneath the massive B-15 iceberg in Antarctica. From desert oases of the Sahara to the cold waters of Baffin Bay, Jill Heinerth becomes the hands and eyes for climatologists, archaeologists, and engineers.

In the course of her endeavors, she has also made TV series for PBS, National Geographic Channel and the BBC, served as a consultant on major production movies for directors, including James Cameron (who is known for such films as Titanic, Avatar, The Terminator), plus written several books and produced documentaries.

Jill serves as the first Explorer-in-Residence of the Royal Canadian Geographical Society and is a presenter on radio and TV broadcasts worldwide. Her best-selling book, INTO THE PLANET, has been lauded by the Wall Street Journal, Oprah Magazine, and the New York Times.

Jill is a Fellow of the International Scuba Diving Hall of Fame, Underwater Academy of Arts and Sciences, Women Divers Hall of Fame, National Speleological Society, and the Explorers Club which recently named her as the recipient of the William Beebe Award for ocean exploration.  Her honors include induction into the Explorer’s Club and the inaugural class of the Women Diver’s Hall of Fame. She received the Wyland ICON Award, an honor she shares with several of her underwater heroes including Jacques Cousteau, Robert Ballard and Dr. Sylvia Earle. She was named a “Living Legend” by Sport Diver Magazine and selected as Scuba Diving Magazine’s “Sea Hero of the Year 2012.” In recognition of her lifetime achievement, Jill was awarded the inaugural Sir Christopher Ondaatje Medal for Exploration. Established by the Royal Canadian Geographical Society in 2013, the medal recognizes singular achievements and the pursuit of excellence by an outstanding Canadian explorer.