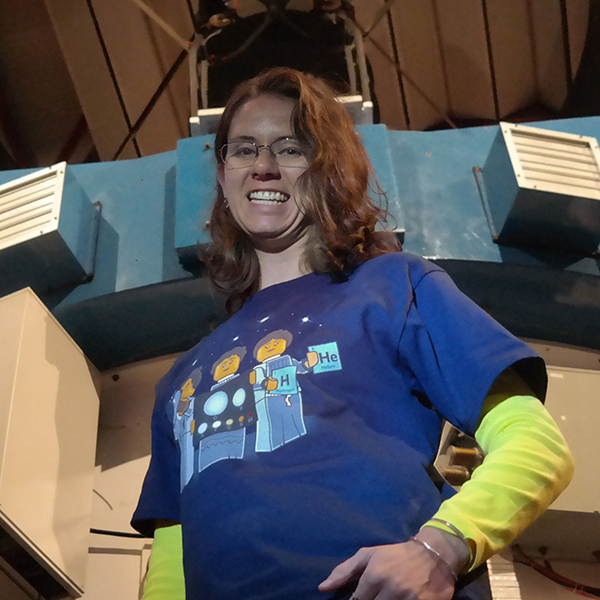 Everything Excites Me About My Work!´: Explore the World of  Exoplanets With Astronomer Johanna Teske Using the Most Powerful Telescopes in Science!

The search for life outside our planet has always inspired Johanna Teske, an astronomer at the Carnegie Institution for Science´s Department of Terrestrial Magnetism, and led her to pursue her groundbreaking work in astronomy. And now she can’t imagine doing anything else as she continues her research that involves working with collaborators and on telescopes around the world to figure out exactly how host star abundances are related to exoplanet compositions, both for giant and small planets — work that is shedding important light on how the chemical elements that comprise host stars influence conditions for planet formation.

“I am particularly interested in how stars are chemically connected to their planets,” says Johanna, who adds: “There’s a catch phrase, ´You only understand the planet as well as you understand the star.´”

She began pursuing observations in this realm for her Master´s degree thesis in Astronomy. At that time, the Spitzer and Hubble space telescopes were starting to produce the first measurements of giant planet atmospheres.

Today, she uses high-resolution optical spectrometers mounted on big telescopes (such as the powerful Magellan Telescope) in Hawaii and Chile to collect her data. It is observing and tinkering with these instruments that is the favorite part of her job. “Everything excites me about my work,” she says, especially the potential of her research “to ultimately help find and characterize Earth-like planets (which we still have to define robustly).” She adds: “I truly believe that in my lifetime we will find strong evidence for life on another planet, which is thrilling scientifically, and also compelling philosophically.”

In her young career, Johanna has already achieved noted recognition. For example, she led the team of Carnegie scientists that discovered three giant planets in a binary star system (composed of stellar ”twins”), which may help explain the influence that giant planets like Jupiter have over a solar system’s make up.  Commenting on the findings of this milestone study, which was accepted for publication in 2016 by The Astronomical Journal, she says: “We are trying to figure out if giant planets like Jupiter often have long and, or eccentric orbits. If this is the case, it would be an important clue to figuring out the process by which our Solar System formed, and might help us understand where habitable planets are likely to be found.”

Johanna says she owes much of her success, and the love of what she is doing as an astronomer, to the teamwork and collaborative spirit that she has experienced at Carnegie and its Department of Terrestrial Magnetism (DTM). “My experience at Carnegie has been so fantastic; the community here is unique in how supportive, creative, and innovative it is. Everyone who works here is not only a scientific leader, but also incredibly nice and fun to interact with. DTM is very interdisciplinary on purpose, which is very advantageous for exoplanet science that often requires knowledge of Earth and solar system science.”

In addition to her research, she is also deeply committed to working with K-12 students to excite them about science. “Helping to mentor, promote, and support students who have been traditionally marginalized in STEM, and in the U.S. society in general, is a priority of mine,” she says. “I want that to continue to be part of my job, even a larger part, if possible.”