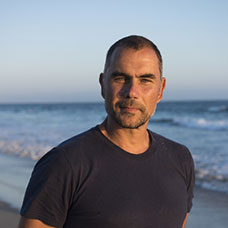 You´ve Heard of Air Pollution, Now Let This Scientist Take You Inside the Problem of ´Plastic Smog´ Plaguing the World´s Oceans

Litter from plastic bottles and other plastic-based waste represents a widespread environmental problem for the world´s oceans and other waterways. Noted researcher Marcus Eriksen is calling attention to such marine pollution — which he has aptly dubbed “plastic smog” — in compelling ways, ranging from his scientific writings and public awareness initiatives, to his captivating global seagoing expeditions.

For instance, it was in 2007 that he and his wife and colleague Anna Cummins, along with colleague Joel Paschal, garnered national media coverage when they built a raft called JUNK from 15,000 plastic bottles and a Cessna airplane, and then used it to drift 2,600 miles in 88 days from California to Hawaii to bring attention to the plague of plastic in the world’s oceans.  Later Marcus and Anna founded the 5 Gyres Institute, a non-profit organization that empowers action — through science, art, education, and adventure — against the global crisis caused by plastic pollution. Currently the organization is engaged in a comprehensive call-to-action campaign to phase out the most harmful plastic products used in California.

So exactly why is plastic such a problem to marine and other parts of our environment?  Marcus explains: “Plastic was first introduced in the 1950s as a miraculous substance that was cheap, lightweight and could be thrown away after use. We didn’t really realize until later is that plastic can be toxic and it never really biodegrades—it remains in our environment for hundreds of years. In fact, most of the plastic that we first started using in the last century is still in our environment today.”

To determine how much plastic is in the world´s oceans, Marcus in 2012 gathered a group of scientists to study the problem.  Together, he and the cadre of researchers determined that there were more than 5 trillion plastic pieces/particles (weighing over 250,000 tons) afloat at sea –enough to stretch to the moon and back, twice.  Their findings were further elucidated in a pivotal scientific study published in the journal Plos One in 2014.

But more alarming, Marcus adds, the study found that more than 92 percent of these pieces are microplastic  — microscopic pieces of plastic that, after being degraded by exposure to the sea, form massive clouds, or “plastic smog”, on and below the ocean surface. These particles migrate around the globe through the 5 subtropical gyres (the circular ocean currents formed by the Earth’s wind patterns and the forces created by the rotation of the planet).

“Recent research has revealed that microplastics are present in ice cores, across the seafloor, vertically throughout the ocean, in the bodies of sea organisms, and on every beach worldwide.  The little stuff is everywhere,” says Marcus.  He adds: The idea that there are “patches” of trash in the oceans is a myth created 15 years ago that should be abandoned in favor of “plastic smog”.

Raised in Southern Louisiana, Marcus began studying plastic pollution in 2004, but before that it was his fascination with snakes, turtles, and alligators that landed his first job at the Audubon Zoo. He then joined the US Marine Corps, and became a combat veteran of the 1991 Gulf War. This experience led him to study evolutionary psychology, eventually earning a PhD in Science Education after studying how primitive motivations influence aesthetic choices about how we perceive the natural world. A true science adventurer, he also studied paleontology (the study of ancient life), amassing a collection of five tons of bones from several Late Cretaceous dinosaurs from expeditions to the badlands of Wyoming.