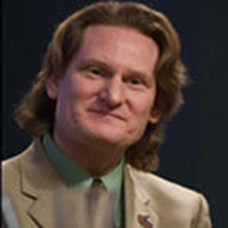 Plenty of Challenging Problems Waiting to be Solved by Engineering

Although acting may have been his first love, Steve Smalley, a project engineer who designs sophisticated radar systems for defense giant Northrop Grumman Electronic Systems, isn’t putting on an act when he tells students straight up: “Think seriously about a career in engineering.”

Engineers are problem solvers, and the way Steve sees it, there are plenty of challenging problems just waiting to be solved through engineering.

“It’s just a matter of survival when you think about it,” says Steve, who at Northrop Grumman has helped design radar systems for projects such as the F-16, F-22, and F-35 fighter jets and the Longbow Hellfire missile, but considers his most important professional endeavor working with schools to motivate students toward engineering careers.

In a country and world driven by technology, “we need products, and products need inventors,” he explains. And those inventors usually have engineering backgrounds.

But finding ways to expose kids to engineering at a young age is a challenge, Steve admits, in addition to informing youngsters of the impact that engineers have on our daily lives. “Too many students base their potential career choices on the jobs that they can actually see on a regular basis”, he says. “For instance, on TV, they regularly see doctors, lawyers, police officers (and technical CSI types involved with solving crime). And at school they see and interact with teachers, nurses and administrators. But when do they actually get the chance to meet an engineer and find out about the wide range of opportunities in that field?”

“This “out of sight, out of mind” phenomenon occurs despite the fact that we constantly use a wide range of products made by engineers –iPod/Pad/Tunes, cell phones, computers, automobiles, the houses and buildings we live and work in, just to name a few,” says Steve. “We see the products, but never the creator.”

During his lengthy career, Steve has worked on defense systems ranging from undersea to outer space. Based at Northrop Grumman’s facility in Linthicum, MD., he is currently primarily focused on a product called Active Electronically Scanned Array (AESA) radar. Explains Steve: “These are systems that are similar to breaking down the single picture-tube in a television into an LCD screen. “Most of the skills I use in my job are fundamental to engineering: problem solving, designed experiments, data analysis, and some thermodynamics.” He also needs to be good at using a microscope (since his job involves micro-electronics) in addition to being proficient in statistics and computer science.

“We are currently making myriad electronic sensors and systems that enable U.S. and allied military personnel to perform their duties in support of freedom around the world.

Steve (whose father was also an engineer) grew up just outside of Pittsburgh, PA where he initially thought seriously about pursuing acting. “My passion was acting, and by all accounts I was pretty good at it. But I was also pretty good at chemistry, physics, and taking math tests and was also on the math team,” he says.

He ultimately decided on pursuing computer science, which was then a newly developing field. While earning his degree in computer science at Penn State, Steve also continued to dabble in acting and found enjoyment hosting physics and chemistry magic shows for visiting high schoolers.

Before joining Northrop Grumman, he began his career by working on computer graphics and computer networking before there were PC’s. And in the course of his pursuits, he later earned his second degree, in Systems Engineering, from the Westinghouse School of Applied Engineering Science.

In addition to the satisfaction he gets from the technical side of his job at Northrop Grumman, he also derives joy from interacting with students at schools in Maryland through the company’s various outreach programs in engineering.

“I really love working with the kids,” he says. “We have some great outreach initiatives, such as our annual DiscoverE program in which we send almost 200 engineers per year out to the schools. We also support the FIRST LEGO league in the state of Maryland; we created a four- day internship program for teachers called TEAACH, and we used that model to create a training program for pre-retiree engineers at our company to get them used to going into the schools before they retire.”

When speaking to young students about making career choices in engineering, Steve likes to tell them: “Aim high, but keep lots of options open. Choosing a career path is one long series of decisions and engineering is a wide and varied field, so take time to consider all options and prepare yourself.”