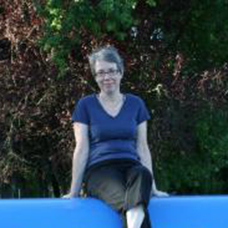 Exploring the Mystery and Origin of Dark Matter With Physicist Sarah Eno!

Sarah Eno, Ph.D., noted particle physicist at the University of Maryland, is part of an elite group of explorers worldwide involved in the famous Large Hadron Collider (LHC) particle accelerator project at CERN on the French-Swiss border. This epic scientific endeavor — in which four other physicists and twenty lab members from the University of Maryland are also playing key roles — seeks to identify the full range of particles, fields and forces that act on and shape the universe´s familiar luminous matter of galaxies, as well as the mysterious, invisible “dark matter” that surrounds these galaxies.

“We believe this project and its findings can tell us much about how the universe started and what it is made of,” says Sarah, adding that although the nature of dark matter and its counterpart, dark energy, remain a complete mystery, taken together they make up a total of around 95 percent of the universe.

The project also aims to identify the origin of the dominance of matter in the universe.  It is known that when the Big Bang created matter, it also created an equal quantity of antimatter, made up of particles with identical mass but an opposite electrical charge. For as-yet unknown reasons, antimatter is no longer common in the universe, but can be re-created in particle accelerators such as the LHC.

At CERN (the European Organization for Nuclear Research), scientist use the LHC to super-accelerate clusters of protons, causing them to slam into each other at 99.99% the speed of light. This essentially allows researchers to look further back in time by creating a “soup” of interacting particles that could mimic the conditions of the universe just milliseconds after the Big Bang, says Sarah.

“This is equivalent to conditions at 10-15 second (a millionth of a billionth of a second) after the Big Bang that occurred about 14 billion years ago, and could reveal the kind of primordial miasma that eventually cooled and expanded into the universe we see today,” she explains.

Internationally known for her work in high energy physics, Sarah is a Fellow of the American Physical Society and has served on many high-profile committees in her field. She earned her Ph.D. and M.A. degrees in Physics from the University of Rochester (NY), and completed her postdoctoral training at the University of Chicago, Enrico Fermi Institute.