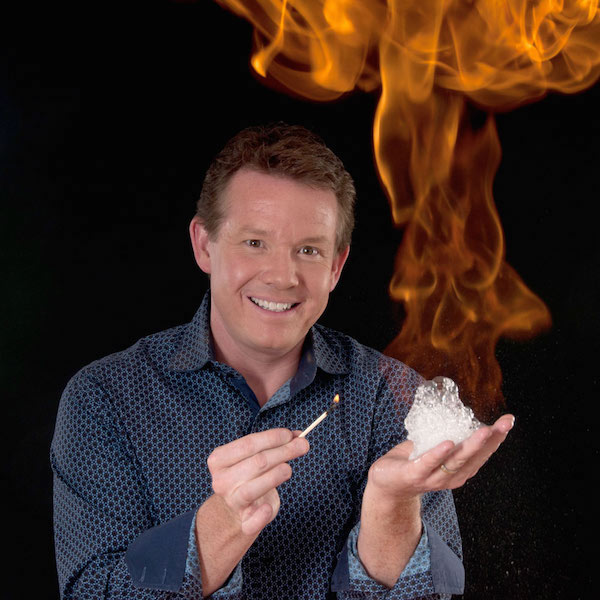 Steve Spangler – known by fans worldwide for his wildly funny, unconventional and engaging science demonstrations on stage, TV and other venues – first came to fame in 2005 with his Mentos Diet Coke Experiment in which he taught millions via YouTube how to turn an ordinary bottle of soda into an erupting geyser of fun. This further propelled him as a leading authority in STEM education, specifically how to excite and inspire both kids and adults in science exploration through creative, interactive activities. His credentials are testament to his popularity and effectiveness as a STEM advocate and science communicator: with more than 1,600 television appearances to his credit, Steve is a regular guest on the Ellen DeGeneres Show where she dubbed him  America’s Science Teacher. He is also the host of the nationally syndicated television series DIY Sci where viewers learn how to use do-it-yourself experiments to amaze friends. The weekly series appears on FOX affiliates throughout the US and internationally on Hulu and Amazon Prime. In 2017 the show received 3 Daytime Emmy nominations including a nomination for Best Family Viewing Series.

As an inductee into the National Speaker Hall of Fame, he is recognized for his ability to turn science into unforgettable experiences, including through his Spangler Science Club whose popular science kits for students result in experiments that inspire wonder, boost creativity, enhance problem-solving skills and make learning fun. In addition, his hands-on science “boot camps” and summer institutes for teachers inspire and teach teachers how to spark excitement into science learning.

Steve received his degree in chemistry from the University of Colorado at Boulder and then went on to teach science in the Cherry Creek School District in Colorado from 1991-2003. He started his career in television in 1991 as the science host of News for Kids, a nationally syndicated program produced by NBC Business Video. For more information, please visit https://stevespangler.com/