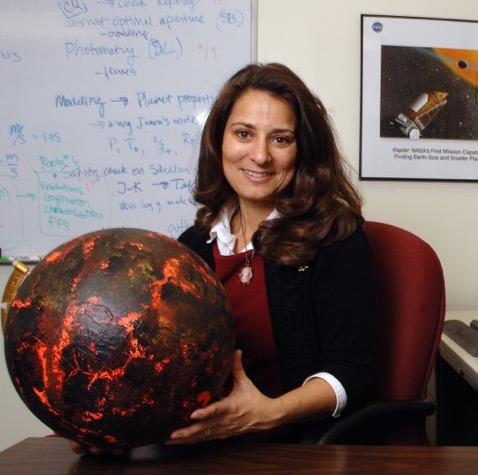 An astrophysicist at NASA’s Ames Research Center, Natalie Batalha was the project scientist for the NASA’s Kepler Mission – an ambitious undertaking focused on searching for planets orbiting other stars in the galaxy. In this endeavor, Natalie and colleagues are exploring the structure and diversity of planetary systems in our region of the Milky Way galaxy to determine the fraction of stars that harbor potentially habitable, terrestrial-size planets.

Kepler is a first step in that direction and has already produced promising results. “From Kepler,” she says, “we’ve learned that, on average, every sun-like star has at least one planet, and that there are over ten billion potentially habitable, Earth-size planets in our galaxy alone – further opening up a pathway for the search for life beyond the Solar System.“

For her work, she is the recipient of key honors in her field, including the prestigious Lecar Prize from the Harvard-Smithsonian Center for Astrophysics this year; and the NASA Public Service Medal for her vision in communicating Kepler science to the public and for outstanding leadership in coordinating the Kepler Science Team. In 2017, she was named one of the 100 Most Influential People in the World by TIME Magazine and was awarded the Smithsonian Ingenuity Award for the Physical Sciences.

Natalie holds a Bachelor’s degree in physics from the University of California (UC), Berkeley, and a Doctoral degree in astrophysics from UC Santa Cruz.

For young women in particular who are interested in pursuing STEM fields, her advice is similar to what she told her daughter Natasha (currently a graduate student in astrophysics): “If you love this work, persist. Many STEM fields still suffer from gender imbalance, and it may cause you to sometimes doubt yourself. But it’s important to pause and remember that you are capable and have something to offer.”