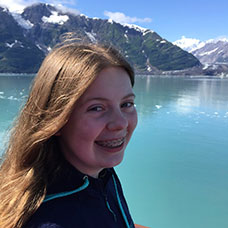 Talented, focused and research-oriented, 11th-grader Emily Cross has already made her mark in some of the most pre-eminent science competitions for young students. Her latest achievement was being selected as a winning presenter at Sigma Xi´s prestigious annual Student Research Conference last year where she received the 2016 Sigma Xi High School Geoscience Medal for her research — titled “Geochemical Extraction of Ceratopsian Remains and Opal from Ironstone” — which examined the viability of softening ironstone for use in paleontological research and geological mining endeavors.

For Emily, a student at Hammarskjold High School in Ontario, Canada, the Sigma Xi honor is indeed significant as her promising career in science continues to evolve. Sigma Xi is the pre-eminent global scientific honour society, and counts over 200 Nobel Laureates as current and past members, including such well known figures as Albert Einstein, James Watson and Enrico Fermi. Each year, Sigma Xi awards one medal per scientific discipline to a high school, undergraduate and graduate student.

In 2015, Emily also placed high in another noted global competition: the Intel International Science and Engineering Fair where she won a first place Special Award for the American Geoscience Institute’s Geoscience Award and fourth place for the Grand Award in the Earth and Environmental Science category. Her project at the fair, called “Patination of Raw Lithic Materials for Analysis of Prehistoric Artifacts”, represented nine months of experiments and research on chemical and physical analysis of prehistoric stone tools. The Intel competition is the world’s largest pre-college celebration of science, with over 1400 students from nearly 60 nations competing for scholarships, tuition, grants, internships and scientific field trips.  Emily repeated her 4th Place Grand Award performance with Team Canada at ISEF in 2016 with her geochemical research on ironstone reduction.

In her earlier pursuits in science achievement, Emily (who has been competing in science fairs since grade 3) also won best-in-division (beginner, junior, intermediate) and best in fair prizes at the Northwestern Ontario Regional Science Fair, and has competed twice at the Canada Wide Science Fair, where she won a coveted gold medal in 2014, placing among the top 10 scientists in her age category.